Just as Pantone announces a Color of the Year, which launches designers, fashionistas, and trend watchers into months of forecasting and prognostication, Kolman & Pryor Gallery announces a color that launches its new year of exhibitions. For 2021, the gallery has chosen the color, Orange, for its fourth show in its ongoing Color Series. The Color Series: Part 4, Orange will feature artwork by gallery artists: Betsy Ruth Byers, Kate Casanova, Jil Evans, Jodi Reeb, and Cameron Zebrun.

“Orange the color of warning, but what does it foretell? Or keep us safe from?” asks curator and gallery co-founder, Patrick Pryor. “Orange is also the color of warmth, and the soothing tone of firelight and candlelight. It’s also a thing, a fruit, an everyday object, and nothing rhymes with orange. It’s all alone and unique.”

Orange, as a color and object, figures prominently in the work of artists throughout history. Ancient Egyptians used a yellow-red hue made from the mineral realgar in tomb paintings. In the 18th century, artists used yellow-red tones to depict the robes of Pomona, the goddess of fruitful abundance. After the fruit became more common in northern Europe, and the first synthetic orange pigment was produced in the 1800s, Pre-Raphaelite painters and Impressionists used the color to heighten the effects of natural light.

More recently, conceptual artist Gabriel Orozco has used single pieces of the fruit or bags of oranges in his work. Christo and Jeanne-Claude draped Central Park with banners of a saffron or yellow-orange color. Oranges also figure prominently in popular culture, including in the “Godfather” films, Pryor says. “Oranges show up right before something dramatic or violent happens.”

“Rich with symbolism and juicy with possibility, orange is an invigorating color for a winter show,” adds Anita Sue Kolman, gallery co-founder. “The gallery artists are all excited to present new work in which their interpretations of orange and its meanings engage and excite visitors.”

Whether used to portray excitement or warning, heat or vitality, optimism or risk taking, creativity or abundance, orange is a color of energy. “My hope is that everyone connects with the color in a way that’s specific or meaningful to them,” Pryor says, “and the artwork provides pathways into a greater understanding of the color orange and its symbolism.” 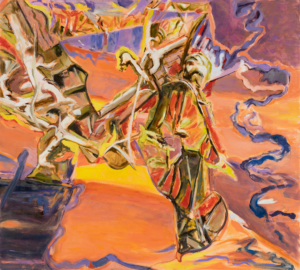