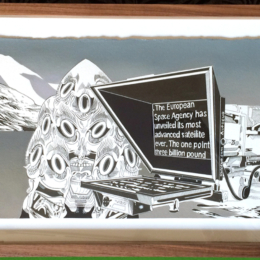 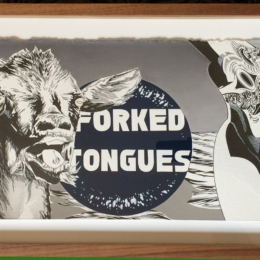 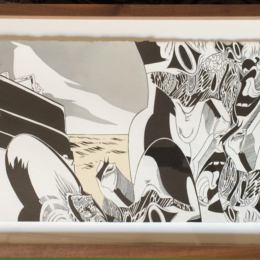 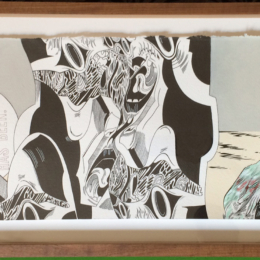 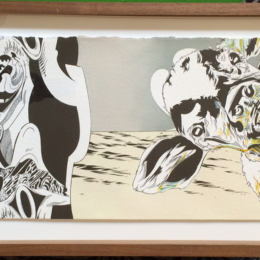 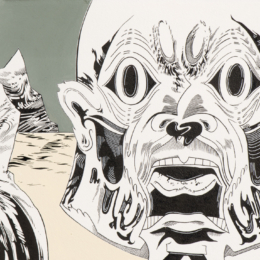 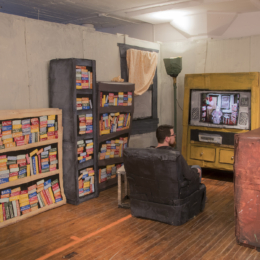 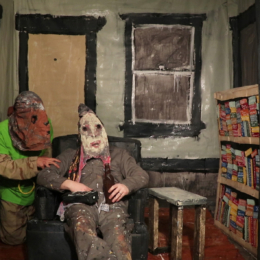 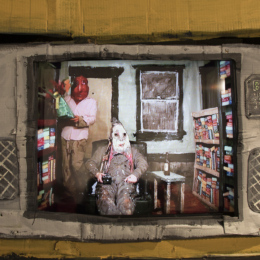 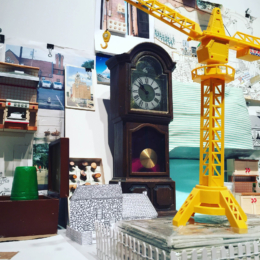 Andy DuCett
Detail From Do Not use In Cribs, Beds, Carriages and Play Pens Mixed media 4 x 4 x 4 feet 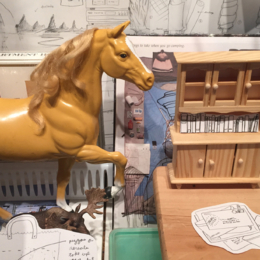 Andy DuCett
Detail From This Is All for Now - More Will Be Added as Time Goes On. So - Mixed Media 4 x 4 x 4 feet 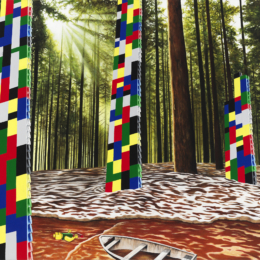 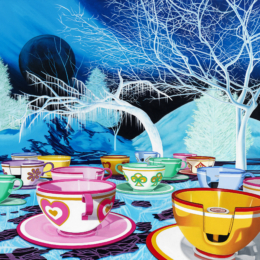 Nicole Gordon
Stop the Ride, I Want to Get Off Oil on canvas 60 x 60 inches Courtesy of Linda Warren Projects 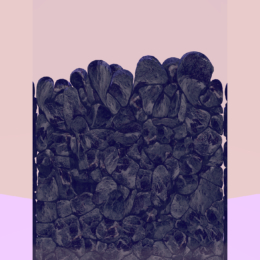 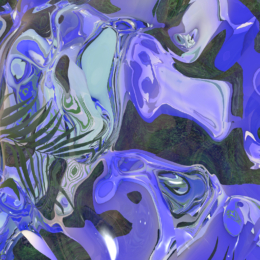 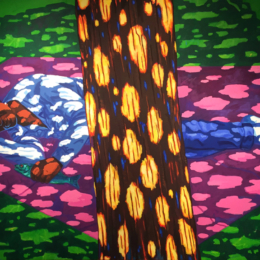 Andrea Carlson: Andrea’s paintings are remnants from two of three series of works: O Cursed Lust of Gold, Forked Tongues and Vaster Ink Empire. These works are sisters, modular, interconnected and can be viewed as a braid of images.

The two-world binary is present in the horizon, where the sea meets the sky, where water meets the shore, where known meets the unknown. As Hugh Blair states:

“O cursed lust of gold; when for thy sake the fool throws up his interest in both worlds. First starved in this, then damn’d in that to come.”

This line is also the last line in the silent film, Greed (1924) by Erich von Stroheim. Andrea is interested in how this film slowly transforms the protagonist into a monster with gold madness. Collectively these paintings are full of slight transformations into the ultimate other: the monster.

A thread connecting the paintings is also the idea of landscape and storytelling that continues to haunt our present interpretations of events. The phrase “Gold, God and Glory” sums up major motivations behind the Age of Exploration… the seascape also relates to the sea voyages of that era where landscapes were believed to be littered with monsters. The two worlds of Blair’s quote is referring to heaven and earth, but this work acknowledges the dichotomy to that of the “New World” as an allegorical heaven for European invasion and colonization.

Preston Drum: Trained as a painter, Preston has recently turned toward building interactive sculptural installations using cardboard, garbage, and other recycled materials. These installations are pseudo-stages where the viewer becomes a part of a performance. There is no script for these plays; the work is driven by a contract between artist and participant to bring equal parts. Preston’s goal is not to dictate a meaning to the viewers but to provide raw material for the viewers to construct their own. This interaction provokes questions regarding how we define the author, the reader and the power dynamics between the two roles. It seems that we all love a story, its pervasive in our society and art, but we must be mindful of the context in which the story is being told and heard. As our society transitions into one dominated by abstractions through technology and screen simulations, Preston finds himself asking the question: What does it mean to make art that encourages people to interact on a personal and physical level? While Preston seeks to understand the world through his own work, his only request of the viewers is that they use this installation as an opportunity to question their own presence in this world and consider how screens impede and promote that presence.

Andy DuCett: Andy is interested in the space between questioning and knowing, traveling and arrival, real and imagined. Andy’s groupings of objects and images reflect the process of searching, but also the world around us, always in flux, in a constant state of becoming.

Nicole Gordon: In this new series of paintings, each timeless setting has been infiltrated by imagery that represents the chaos that invades the quiet space that we long for. The heightened colors and out-of-place objects create absurd and sometimes disturbing stage-like scenes that cannot possibly exist in nature and become an alternate reality. The landscapes reference fairy tale settings in which complex and often disturbing narratives are revealed within a context of dreamlike prettiness. The disturbance to the serenity animates the setting and breathes new life into the space, highlighting the tension between the artificial and the real.

Sarah Faye McPherson: Sarah’s work centers on the digital milieu and what it means to be living in the ever-thinning space between the real and the digital. In both Here Nor There and in As Hard and As Solid, Sarah is developing new realities and physical properties for materials in the digital realm to convey ideas relating to our physical ecology and its current ease of manipulation, replication, and control. The colors, textures, and shapes used in these works are from her collection of digital scans, photographs, and 3D scans of physical objects.

Lamar Peterson: Inspired by elementary school bulletin boards, educational activity books, and crepe paper streamers, Lamar creates graphic portraits of an irrational world where happy characters are resolutely accepting of grotesque misfortune. The plague of absurdities presented in these paintings is rooted in popular culture as much as it is in old-hat surrealism. Issues of race, community, and social and economic upheaval are candy-colored and darkly comic. Lamar never allows his people to be fazed. They never notice the nightmare. And it is here, within this pitiless deadpan that his work resonates.